When I heard that General Motors was testing a new feature that allows drivers to post Facebook status messages while driving, I couldn’t wait to try it out. So I called GM, explained that I have a blog with almost a dozen regular readers, and asked if they’d let me try the system out for a few days in exchange for some free publicity. Naturally, they jumped at this opportunity and offered me a 48-hour test drive.

Tuesday, after work: I stop by the dealership to pick up my vehicle, a Chevy Impala with the prototype social networking software installed. After programming in my login information (a tedious process, but one that only needs to be done once) and getting a brief tutorial on how to use the system, I’m all set. As soon as I pull out of the dealership, I dictate my first (admittedly unimaginative) update: “Hi! This is my first Facebook update from my car”.

Apparently the speech recognition leaves something to be desired. With some practice, though, I eventually manage to get the system to understand me consistently, although it’s not very good at punctuation.

Wednesday morning: I try out the basic system features during my morning drive to work. I love it! It really eases the boredom of a long commute. The miles just fly by as I post a couple dozen updates; I’m sure my friends are thrilled, too, because I’m posting more updates in an hour than I normally do in a week. 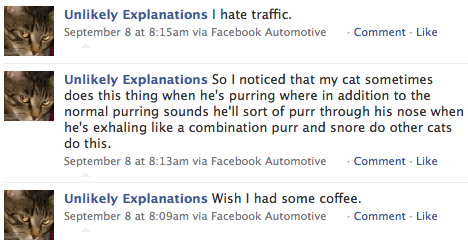 Facebook’s geotagging feature works, but it’s kind of a pain to use. You can check in at a predefined Place, but the interface requires that you select and confirm the Place you want to check in to. And if no appropriate Place has been defined, you need to go through the additional step of creating one. I checked in to a couple Places during my test drive, but I’m not really sure it’s worth the effort.

My only other complaint is that the system doesn’t include an integrated camera, so if you want to post a picture of something, you still need to use your cell phone.

Thursday morning: Time to switch gears (so to speak) and try the Twitter interface. Tweeting is a little more difficult than posting a Facebook update — once you reach the 140 character limit, your only choices are to tweet what you’ve dictated so far or start over; however, Twitter’s tagging and geotagging features make it easy to strike up conversations with nearby drivers. 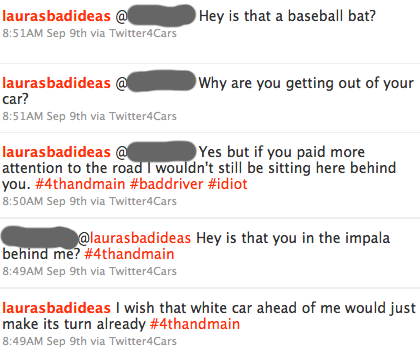 Unfortunately, I ran out of time before I got a chance to try out more of the Twitter features (I had to deal with a few unexpected dents in the car’s hood before returning it to the dealership Thursday night). Overall, though, I think social networking software for cars is a great idea, and I can’t think of anything that might possibly go wrong.

View all posts by Laura

This site uses Akismet to reduce spam. Learn how your comment data is processed.

Posts that don’t make me cringe. Much.

The Archives page has links to every post that's ever appeared on this blog.

Not what you were looking for?

If a search engine brought you here while you were looking for something else, please see An Open Letter to Anyone Who Was Directed Here by a Search Engine.

What people have been saying